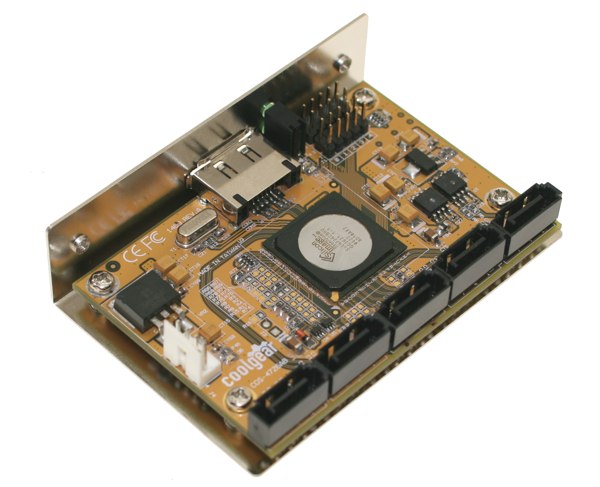 5X1 eSATA Hardware Port Multiplier - Connects up to 5 SATA / SATA II hard drives to any computer via a standard eSATA port or USB 2.0 port* (optional USB 2.0 Adapter Required). Once the RAID configuration is set up, the entire RAID set can be moved to any computer (since this is a TRUE Hardware RAID)...

Simple One Step Solution for Enclosure Owners that Require HardWare RAID Processor for up to 5 SATA II HDD's.

JBOD A storage policy that grants the host computer direct access to a physical disk drive. With JBOD (just a bunch of disks), the number of available virtual drives is equal to the number of physical drives. JBOD is also called the bypass mode because the host bypasses the SteelVine virtualization engine to access the drive directly. SAFE A storage policy in which all data are stored in duplicate on separate hard disk drives to protect against data loss due to drive failure. At least two hard disk drives mirror each other at all times, equivalent to RAID 1. Every write operation goes to both drives. SAFE provides the highest level of data protection, but halves the amount of storage space because all data must be stored twice.

The Basic Configuration Wizard implements the BIG storage policy by concatenating all the hard disk drives into a single volume. FAST A storage policy in which I/O processing is balanced evenly in a method known as striping, equivalent to RAID 0. Striping increases storage operation speed as each portion of data is divided into segments that are written to different disks simultaneously. FAST offers the best performance in terms of speed, but has no redundancy of data. To implement the FAST storage policy, the Basic Configuration Wizard creates a single volume of up to five hard disk drives in a striped format. SAFE and BIG A storage policy in which one-half of the available storage space is concatenated. The other half mirrors the first half to provide full data redundancy.

The SteelVine Storage Appliance is available from leading storage partners in preconfigured user set-ups or it can be set up on site. The end-user does not need to be an experienced storage network administrator to understand and configure the SteelVine Storage Appliance, nor does he need prior knowledge of physical disk drives or storage concepts. The SteelVine Manager can be run at any time to monitor or reconfigure the Storage Appliance. The SteelVine Manager’s monitoring function allows preventive maintenance and enables troubleshooting by using environment-control feedback. The guided configuration utility helps the end-user set up and maintain the best possible configuration for his/her organization.

The industry-approved external SATA connector assures a robust and reliable interconnect and extends the reach of your SteelVine Storage Appliance.