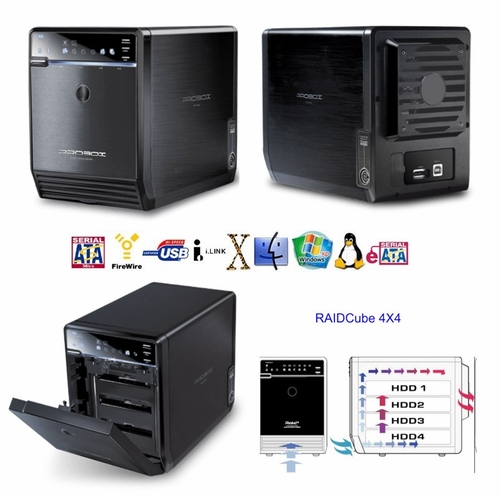 We hope to release this Item by Late December 2008, More Specifications Coming Soon! RAIDCube™ 4 X HDD to 1394b/USB/eSATA 3Gbps 4-Bay Raid Box 4-Bay RAID System Expands Storage Easily and Backup Data Safely Massive storage capacity and fault tolerance are the major concerns in terms of RAID storage management for any enterprise, SOHO, or power user. Commercial enterprises that fail to deploy a RAID System or implement disk mirroring can face even greater costs in the event of disk failure. Potential adopters of the RAID technology will discover that the utmost cost of disk failure is the accumulated long-term loss of sales. The RAIDCube4x4 3.5 eSATA/USB2.0/FireWire 400/FireWire 800 SATA HDD 4-Bay RAID System helps prevent data loss and makes storage management easier. The RAIDCube4x4 offers RAID modes, which include RAID 0(Striping), RAID 1(Mirroring), RAID 5, RAID 5+HotSpare, and RAID 0+1, to facilitate your different considerations. RAID 0(Striping) mode is the best choice for maintaining optimum performance when working with giant files, and storage-hungry audio or video editing applications. RAID 1(Mirroring) mode provides real-time data protection and fault tolerance by making an exact copy of everything you have as you go, perfect for security sensitive users. If catastrophe strikes and the first HDD fails, an exact duplicate backup is always available. With automatic rebuild support, mirroring is the ideal solution for backing up and protecting your large mission-critical databases. The RAID 5 mode requires a minimum of 3 drives to implement. Each data block is written on a data disk. Parity for those blocks are in the same rank and generated on Writes, recorded in a distributed location, and checked on Reads. The RAID 5 mode provides a fault tolerance feature by using block-level striping with parity data distributed across all the disks in the RAID System. When a block of data is written onto a disk in a RAID 5 disk array, the parity data is generated within the same stripe. If one of the disks fails, when the broken disk is replaced with a new one, the source data can be reconstructed back through parity calculation. The RAID 5+Hotspare mode uses the same RAID structure, but the last drive is used as a spare disk and will automatically replace the drive itself if it breaks down. The RAID 0+1 mode requires a minimum of 4 drives in an array. The RAID 0+1 mode is implemented as a mirrored array which its segments are RAID 0 arrays. It provides addition features such as higher performance and data security. If one of the drives becomes defective, the identical backup data is still right in front of you. Model RAIDCube4x4 Connector eSATA x 1, USB 2.0 x 1, 1394a x 1, 1394b x 1 Chipset Oxford OXUFS936QSE HDD Support 3.5 SATA HDD* *Identical HDD recommended  same manufacturer, capacity and RPM RAID Level RAID 0 (Striping), RAID 1 (Mirroring), RAID 5, RAID 5+HotSpare, RAID 0+1 Data Transfer Speed eSATA: up to 3Gbit/sec USB 2.0: up to 480Mbit/sec 1394a: up to 400Mbit/sec 1394b: up to 800Mbit/sec System Material Aluminum case with plastic parts LED Indicators Power / Connection / Health / Access / Rebuild / RAID Alert Power Supply Input: AC 90-264V Output: DC +12V/5A Peak current: 12A FAN Dimension: 80 x 80 x 10 mm x 1 Speed: 1900 R.P.M +-10% Noise: 17.13 dB(A) max Dimension 210 (L) x 138 (W) x 213 (H) mm Weight (without HDD) 2.3 KGS Certification CE, FCC <img src="/lib/cooldrives/very-large-picture-of-raidcube-case-1.jpg" alt="raid cube sata hard drive raid enclsoure with esata and fireiwre ports>