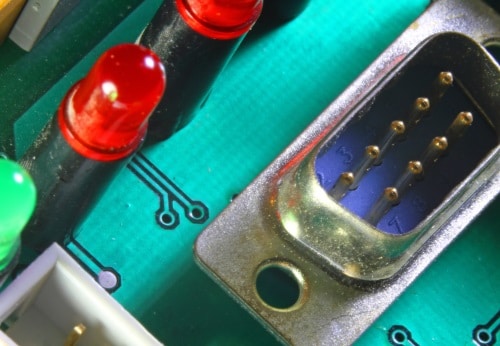 The world runs on USB.

Since the 1990s, it's been the standard for connecting hardware and devices. It's the industry standard for everything from connecting printers to charging your cell phone.

But it wasn't always.

Before the dawn of USB, there was RS, or Recommended Standard 232.

It came about in the very beginnings of data exchange, and for a long time, was the only available standard. In fact, while many Late Millenial and Gen Z programmers might not recognize it, RS232 was the standard for most programmers of earlier generations.

Let's take a look at the specifics of RS232 and see if we can dispel the mystery around this technology of yesteryear.

In rough terms, it's a data exchange standard, like USB. However, if you placed an RS232 connector beside a USB connector, you would notice some significant differences.

If you've ever owned a TV or printer manufactured before 2000, chances are you've at least seen the port for one of these connectors. It's comprised of 25 pins and two side screws that keep it attached to the hardware.

The RS232 was first defined in the early 1960s, purely for the purpose of connecting an electromechanical typewriter and an early modem (then called a data circuit terminating point). From there, it became the standard for connecting myriad new tech as it became available.

Throughout the 1980s and into the 90s, the RS232 came standard on almost all models and was used primarily for connecting peripheral hardware like printers.

A request to send, or RTS, is initiated from the host device. The answering device then clears the way for the information and sends a CTS, or clear to send. The data is then transmitted.

It's clean and simple, if limited.

RS232 is great for applications that need simple, straightforward data transference. For many, this is reason enough to still claim competition with USB. The standard is limited, however, in both speed and power; and, in a more physical way, by cable length, as RS232 only has a 15-meter range.

RS232 may seem glacial in terms of speed by today's standards, but it was more than enough for its early applications. Let's look at the specs.

RS232 has already been far outstretched by USB and is likely to fade into obscurity over the course of the next several years.

But, as with all tech, it's just as important to know where we've been as to see where we are going. Understanding the origins of the tech we use gives us a better understanding and a clearer picture of what we are capable of.

For more on the future of connecting technology, take a look here.